The Okavango, the delta that flows into the desert

In the heart of the arid lands of Botswana it is an enchanted place, a place characterized by calm waters, reeds and landscapes spotted with bright green: This is the Okavango Delta,which is the largest inland river delta in the world . 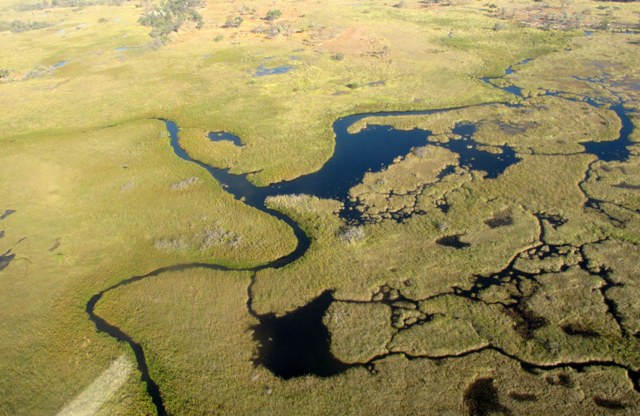 The Okavango River, the third largest river in Africa, travels over 1000 km without ever finding the way of the sea and therefore its waters end their journey here, absorbed by the saltworks located in the central part of Botswana. This river, which disperses its waters on the border with the desert lands of the Kalahari, creates a landscape of rare beauty and a perfect environment for the sustenance of a myriad of animals .

The delta contracts and expands according to the seasonal rhythm of the rains . Starting in March, the abundant rains that fall in Angola, start to swell the river. During the following months the rains gradually moved westwards, following the course of the river. Between June and July the delta reaches the greatest water flow so as to get to earn up to 3 km a day . In August the flow of the river decreases and the labyrinthine canals start to back away. The major dry period is from November to March.

The truck of our group of Adventures In the World leaves us in Maun, in front of a small airport where we get on board a Cessna plane . The small size of the aircraft makes it much more sensitive to air currents and the young rider’s acrobatics driving us in this sensational panoramic flight do not help the weak of the stomach. Despite this the eyes, or the part of the body that, in this situation, can claim the right to say the last word, thank you for being here.

In fact, from above, the complex grid of canals, lagoons and islands and the colors of the earth mixed with the green of the vegetation and the iridescent blue of the water, give the vision of a lunar landscape . Small dark dots move slowly on these strips of land emerged, and only when the aircraft is lowered I can decode them: they are large herds of elephants, buffaloes and zebras .

It is as if it were a large mosaic that only observed closely reveals the pieces that compose it. A mosaic created by animals, lagoons, islands, canals, forests and forests of aquatic plants .

The flight lasts more than half an hour and allows you to enjoy views very different from each other since this type of landscape changes its appearance depending on the amount of water present in each area.

As wonderful as this Delta seen from above, in my opinion, you can not go away from here without having experienced the unique experience of navigating its waters with the typical mokoro , a traditional boat made from an ebony trunk .

In fact, the mokoro in ebony are increasingly rare because they are replaced by the more “eco friendly” glass fiber mokoro, but I admit they do not have the same charm. Whether they are made of ebony or fiberglass, what does not change is the first impression of instability that they transmit, certainly due to the very low, narrow and elongated shape. But unlike what you can think of, mokoro are perfect boats for sliding quickly over the shallow waters of the Delta .

There are two seats, while at the stern a boatman pushes the boat with a ngashi , that is, more simply, a long wooden perch that sinks on the soft backdrop acts as a lever.

There are things that this excursion is right to expect, others not.

For example, you do not expect huge packs of animals on the banks. To spot elephants, zebras and lions it is advisable to get off the mokoro and take a guided tour by land.

But if you expect that peace and serenity that only the silence is broken by genuine, genuine sounds, such as the light rubbing of the boat on the water and the rustling that it creates making its way through the reeds, then you are in the right place.

Just as you are in the right place if you can not resist the magnetism of calm and transparent water because, following carefully the instructions of the boatmen who can indicate suitable areas, you can immerse yourself in the cool waters in a unique environment in the world .