Casablanca, unlike other cities, will never be love at first sight. Falling in love at first sight of this city is really impossible. I have never heard anyone sustain the overwhelming beauty of this city, I for one. But I can also say that maybe I would not live in any other city in Morocco , because it is so, you love it or hate it , but in any case, it deserves a visit or at least a reading. 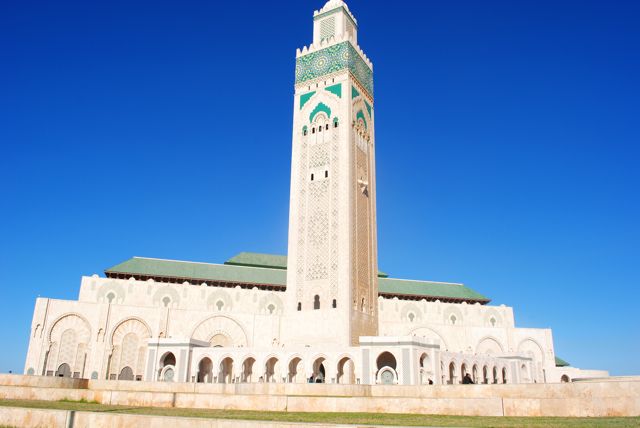 This metropolis has a high number of inhabitants (sometimes read 3 million, sometimes 7, sometimes 12), boasting the primacy of the first city of Morocco. It is the financial and economic capital , and this attracts an ever-increasing number of people, attracted by the possibility of finding work, which are going to fill the suburban neighborhoods of the city that is actually expanding inward. Yes, because there is also to add that Casablanca is the most expensive city in the country , rents are very high, and living near the center is a privilege of few (and Europeans).
It is a metropolis with long tentacles where you can feel like in many European capitals, shops and cafes are the same, restaurants and bars full of businessmen in aperitif hours, discos for all tastes, and very little tradition and religion . The girls with the veil in Casablanca are few, and it will be easy to find women at the bar that show off clothes worthy of via Montenapoleone.Yet here we find the Hassan II Mosque , the largest mosque in Morocco and among the largest in the Arab world (the first two in the ranking are in Saudi Arabia). An imposing construction, built following the most modern architectural techniques and the sacred scriptures of the Koran. New and ancient to blend in a place that holds up to 25,000 faithful in prayer inside and 80,000 outside. Among other things, we can take a bit of merit because the glass comes from Venice and the marbles from Carrara .

The Hassan II mosque was built for the will of King Hassan II (father of the current king), and two-thirds of his structure is on the water ; we find here two aspects of religion: in fact in the Qur’an it is said that God’s throne is built on water and whoever in life has built a place for God, will have a better place in paradise.Although not the most tourist attraction of Casablanca, it is worth visiting too because it is the only mosque in which non-Muslims can enter; in fact, in Morocco entry into any mosque is forbidden to anyone who is not a Muslim. The fact remains that to enter the mosque there are precise times, can not be visited during prayer hours, and during Ramadan the hours are even more limited. And obviously there are limits in clothing, being forbidden to enter with skimpy clothes (even if common sense would be sufficient without the need for rules.)

Once you visit the mosque, you can go to the second most visited place in the city, the Habous district : it certainly recalls the ancient medes of Fes or Marrakech , but was conceived by a French architect in 1917. Unfortunately the maladministration has meant that this neighborhood is rather decayed, without prejudice to the possibility of finding Moroccan crafts and small pastries with typical products , which is rather difficult in the rest of the city.

« The Okavango, the delta that flows into the desert Sudan on the road »